Train at Greater Than 70%

You have arrived here, so I’m assuming that you’re ready to get into it. This means that you’re ready to train at a high intensity. This is a good thing! If you follow my guidance, results should come readily. Goal setting will be the first step – the clearer you are in your mind what you want to achieve, the more likely you are to achieve them. We will also plan out your week and look at making some new habits that will put you in good stead to achieve your goals. We will periodically revise these to keep you on track.

Then once we have these processes in place, it will be time to get into it!

“J.J has always listened to how I want to transform my body and has adapted every session to accommodate those goals. I can see my body changing after training with him for only a few weeks, for this I am so grateful. Training with J.J. isn’t something I do every week because I have to, it’s because I want to.” – Sarah 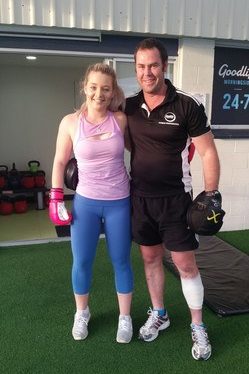 Here is a story with possibly the healthiest of reasons to want to lose weight (ie. so that you can do the things that you want to do). When Kristin contacted me, it was clear that she was very determined to achieve her goals. Her intent to get into shape was so evident that I asked her why she was so driven to lose weight, and she told me that she had recently discovered that she had an older half-sister that had been adopted out at birth. She had only known her for about a year, but in that time her sister had revealed to her that travelling and history were two of her passions, and she had visited a number of historical sites in her lifetime, but she had never been to Machu Pichu. However, she would soon be of an age where that would no longer be possible, so she was planning a trip within the next two years. It was Kristin’s plan to surprise her sister by getting into shape to accompany her on the journey and do the trek to Machu Pichu, and also pay for the trip for both of them.

Kristin was so motivated and listened to every little bit of guidance and advice that I was able to give her, that she was ready to make the trek within 18 months. When she felt she was physically fit enough, she revealed to her sister her plan (who was so excited that she hired a limo for them both and went out that night to celebrate). After a few months of planning, they did the trek, got some great photos, and even made friends with their guide who they go back to see every year. Whilst Kristin lost 15kgs during her preparation for the trek, her main goal was not weight-loss, but rather to get fit and strong enough to make the trek. And now she has some great memories and stories that she shares with her sister.

These are the options that I provide;

For further information, contact me for a free consult.

To find out more

In need of other health professionals?