If you find the idea of strength/weights training daunting, don’t worry, I will only incorporate it into your program if you are comfortable with it, and if it is suitable for you. 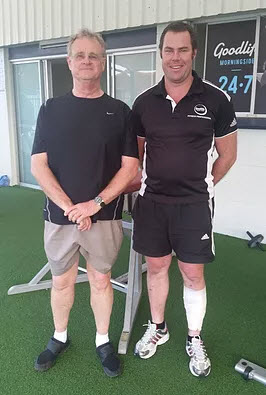 Here is Neil’s story. Like Steve, Neil was retired and liked to travel. Neil contacted me upon his wife’s encouragement. All of his life Neil had been a keen adventurist and he and his wife had done many 4wd trips across the country. But over the years he had progressively put on weight and let his health slip. He reached a turning point when they had a breakdown in a remote area and Neil was forced to walk 15km to the nearest farmhouse to get assistance. He made it, but later that day collapsed from dehydration and spent three days in hospital recovering. After that he was afraid to do anymore outback trips, and the 4wd never got used.

After a couple of years his wife could see how bored he was and asked him would he consider doing something about his weight so that he would be confident enough to plan another trip. With a little urging, he allowed her to make some enquiries, and that’s when she found me. He agreed to meet up with me, and it turned out that we shared an interest in 4wd’ing, and so he started training with me. To begin with he was quite unfit, but he was quite motivated by the idea of being able to go on another trip. He trained with vigour and began walking regularly as well. Within a year he was much fitter and had dropped considerable weight and felt confident enough to plan another trip. He has since sold his 4wd and bought a brand new Hilux Tundra, and he and his wife are planning a trip to Cape York.

These are the options that I provide;

For further information, contact me for a free consult.

To find out more

In need of other health professionals?